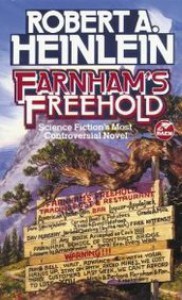 Well, that was odd.

On the plus side, at least the overt racists in this books were vilified. On the negative side, the author drew heavily on ridiculous, lazy racial stereotypes that were just slightly less appalling than the views of his aforementioned villains.

Still, I could forgive the unintentional racism if the story were good. But unfortunately, it was quite stupid. Things went downhill almost exactly in the middle of the book, when the author apparently decided that what this story of rugged survivalism lacked were futuristic black men who liked to castrate their servants.
Tweet