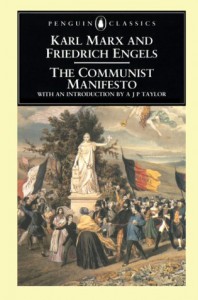 I'm sure if Marx could have his way, he would prefer not to be remembered for The Communist Manifesto. His language is forceful and impassioned, which is not unexpected given his age at the time of its writing, but like many forceful, passionate works, it is also demagogic and sophistical.

Like all halfway decent thinkers, Marx was able to advance beyond his earlier work and refine his ideas. But unfortunately for him, this was his most lasting literary gift to the world. I never could have imagined such a minuscule pamphlet could contain so much bloviation. While the first two sections had some interesting, albeit superficially treated, points, the final two sections were very much suited for their times and not for posterity, as they dealt with the differences between the various socialist parties and literature of the day. In other words, minutiae of interest only to the scholar or sycophant. On the whole it was at times tortuous, and at others facilely polemical.

Though I haven't read Capital yet, I plan on it. I thoroughly disagree with Marx's prescriptions for a just society, but I respect that he was a man whose ideas became wildly influential, and it would be unfair of me to judge his entire career by this notorious little trifle he turned out in his youth. But if I am to judge The Communist Manifesto strictly on its merits alone, I think my rating is more than fair.
Tweet