Wouldn't It Be Nice: My Own Story 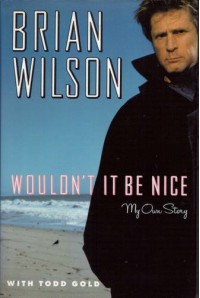 There's essentially two halves to this book: the first half, with deals mostly with Brian's pre-Landy life, and the second half, which is his Landy and (briefly) post-Landy life. The former is interesting and engaging reading, and hell, maybe some of it is true! Though in Wouldn't It Be Nice, I'd take everything with a sizable lick of salt. But even if it's mostly fabrication, at least it's good reading, and for that, the first half of the book deserves a much higher rating than the 3-stars I gave it. And the reason why is the second half.

After meeting and "befriending" Landy, the story quickly devolves simultaneously into a nauseating panegyric extolling the virtues of said Svengali-cum-charlatan, and a philippic denouncing Brian's first wife Marilyn, their children, and the Beach Boys (though I certainly have no sympathy for Mike Love, who from various other sources, seems to deserve the attacks). This second half of the book is so frustratingly polluted by Landy, it doesn't even deserve a star.

So there you have it, a book that starts off well, and ends terribly. Of course, I went into this book expecting as much. I wouldn't recommend anyone read it as a definitive account of Brian's life; rather, approach it as an artifact of Brian's Landy-controlled days, and realize that just about everything contained in these roughly 400 pages are contaminated by that discredited, and now-deceased, charlatan.

So there you have it; my reasons for making this logical, arithmetical compromise of 3-stars.
Tweet